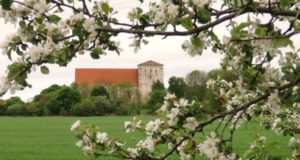 We also use Facebook.
There you will find a lot of information about upcoming and past events.
The link can be found in the “to Facebook” menu. Below is a brief overview of previous years.

2018
Liis Lulla has been arranging charity concerts in Pöide Church already since 2007 after she started her flute studies abroad. Each summer the program includes different masterpieces of classical music. This summer (2018) we can expect concert No. 11 and the program will be very classical, including music by Bach and Telemann.

On July 4, 2015
curly birches donated by Curly Birch Union to St. Mary’s Church of Pöide were planted around the church. Participants included President Arnold Rüütel, the Chairman of the Curly Birch Union – scientist Ivar Sibul, and engineering archaeologist Villu Kadakas. The event was concluded by a short concert given by singer Triin Ella.

In June 2015
the restoration work of the southern portal and filling of openings begins.
45 000 EUR from state budget are assigned for the work, in addition, 15 000 EUR are donated by Saaremaa Knighthood to Pöide congregation for the restoration of the three windows below the tower. The total cost of the work is over 100 000 EUR.

2012
The renovation of the roof of Pöide Church begins. Workers assembled a lot of frames (or simply rafters), which are lifted to the right place by a crane.